Van Gogh in Peppers is an important and gritty memoir about one man’s struggle with depression. I “met” the author, Christopher Scott Downing, in the twitterverse and was impressed with his candor when talking about his struggle. He’s also one heck of a writer.

We struck up a dialogue and he asked me to contribute a Foreword to his book. I was honored to do so and you can read it below. I hope that men who struggle with depression hear this message. It’s a good one.

You can learn more about Christopher and his story at vangoghinpeppers.com.

Van Gogh in Peppers is available in paperback and Kindle format at Amazon. In order to get the word out about this important book the Kindle version is being offered at a huge discount during the launch. An audiobook is in the works and should be ready in July of 2015 so stay tuned.

Christopher will be donating 1% of all proceeds to the Second Wind Fund, a Colorado organization dedicated to providing kids at risk of suicide the mental health treatment that they need.

I will be donating my entire 1% of proceeds to the Michigan Psychoanalytic Foundation. 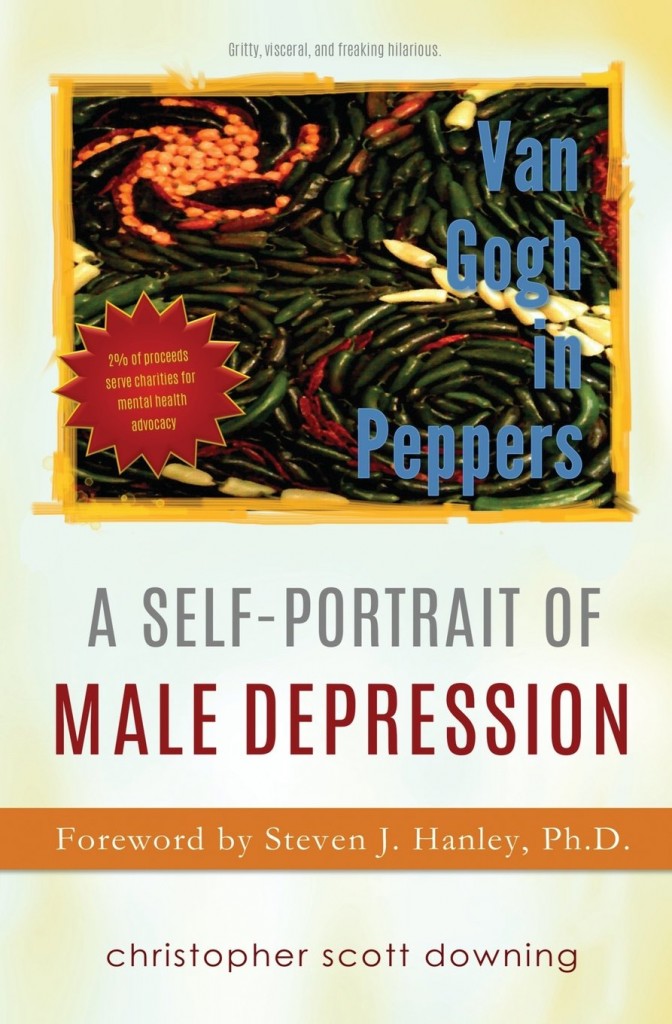 A River Runs Through It, the 1992 film directed by Robert Redford, is based on the semi-autobiographical novella by Norman Maclean. This beautiful and haunting coming-of-age story about two brothers is set against the backdrop of early 20th-century Montana and the brothers’ love of fly fishing.

The younger brother, Paul Maclean (played by Brad Pitt), is your prototypical “dude.” To most, he is the life of the party—an outrageously handsome, slightly mysterious, and outwardly confident man of action. To others, often those closest to him, he is a guarded, talented though arrogant, impulsive, and self-destructive ticking time bomb.

In a pivotal scene, Paul’s older brother Norman talks to his future wife, Jessie Burns. Referring to her own troubled brother, she says to Norman, “Why is it the people who need the most help won’t take it?” Norman’s face conveys recognition as he considers his own brother’s self-destructive path.

As I read Christopher Scott Downing’s Van Gogh in Peppers, a memoir about his experience with Major Depressive Disorder, this is the question that I kept trying to answer. While we don’t know if Paul Maclean suffered from depression, he clearly had his demons and handled them horribly.

So did Christopher. This is the prevailing message of his story. Christopher makes a convincing case that he suffered from Major Depressive Disorder. He makes an even more convincing case that it was foolish to try to treat the condition on his own. He did not seek help and adamantly refused any that was offered to him. This was a mistake—one that Christopher hopes to help other men avoid.

Given the dark nature of its subject matter, Van Gogh in Peppers is surprisingly entertaining and even humorous. Even so, the memoir is not intended to inspire or make you feel good. Christopher’s dialogue is spot-on, especially in the scenes where he talks to his friends. The memoir is reminiscent of the wonderful buddy film Swingers (1996). At times exquisitely painful to read, the story never gave me the sense that Christopher intends to scare. He achieves a nice balance here and reaches his goal of starting a difficult conversation about men’s struggles with Major Depressive Disorder and the destruction it leaves for loved ones in its path.

As a clinical psychologist and practicing psychotherapist, I work with depression on a daily basis. It comes in many shapes and sizes. If you haven’t suffered from it yourself, it’s likely that someone close to you has. Depression is the leading cause of disability in the U.S. for people in early to middle adulthood. Men are significantly less likely to seek treatment for it than women. I’ve seen untreated depression ruin lives and families.

It is hard to imagine someone more in need of treatment for depression than Christopher, as he presents himself here in his memoir. He is a miserable shell of a reckless, self-destructive man. He is obviously bright, but his own intellect and machismo are his biggest enemies. Bordering on self-delusion, he seems to be the last to know that his life is in shambles. We have his retrospective narration as the only glimmer of hope that he managed to get to the other side, but we are left with no clue as to how, or how successfully, that was done.

What we are left with is a provocative and tragic play-by-play of a debilitating condition and Christopher’s ill-advised efforts to handle it without professional help. His “treatments” include top-shelf bourbon, mediocre wine, compulsive sexual indulgences, pot, fantasy, and wishful thinking. Combined with dark solitude, these lead to near suicidal self-loathing and despair.

Christopher’s depression is profound. We see him at the proverbial rock bottom. An implied message throughout the memoir, however, is that you don’t have to feel this bad or dark to benefit from professional treatment. This is Christopher’s cautionary tale and advice to the reader: Learn from my mistakes.

Over the years, I have worked with hundreds of suffering individuals in psychotherapy. In my own practice, I have noticed a cruel irony: Sometimes those most able to make use of therapy are the ones who need it the least. Conversely, those in the direst of need, like Christopher Scott Downing, are often the most terrified to begin the process.

Everyone is unique, but I know the “Christopher type.” We would get along well. He would be mildly suspicious of my calm, outwardly conservative, and professional demeanor. He would ask himself, “How the hell is this khakied, button-up collared guy with diplomas on the walls of his comfortable but amateurishly decorated office going to help me?” He would give me a chance though. He’s smart and well spoken. He would regale me with interesting stories from Russian literature or about the art of stacking artichokes at his work. Often these stories would unwittingly mask the true intensity of his depression, which might not be revealed until well into the therapy. The stories would serve as an emotional smoke screen, a magician’s sleight of hand, revealing and obscuring at the same time.

An early scene in the book tells of a “freaky and gross” (and luckily rare) incident on the loading docks of the gourmet, all-natural grocery store where Christopher works: “We’ll peek behind the curtain first chance we get—to expose the terrible, hidden slithering things awaiting our awe.” In therapy, I would invite him to peek into the uglier, scarier, and more painful parts of his experience and history.

Christopher’s type, however, is not the only one who would come to my office with depression. Others exhibit more concretely what to outsiders looks like the “I don’t want to talk about it” cliché. Their marriages may be on the brink of divorce and they may be barely holding onto their jobs, if they even have one. In my office, they are quiet, silent even. They may, truly, not want to talk about it. What is more likely is that they haven’t the slightest clue where to begin or what to say. Feelings and emotions might as well be a foreign language to them. We start wherever we can, with baseball, fly fishing, Ultimate Fighting Championship, or even esoteric Latin American fruits. My job is to create a safe space for honest self-reflection.

As a psychologist, I am most helpful to people the more they let me into their lives to hear their stories, even as the stories are unfolding. There is no magic to this process, and it is by no means a panacea. I often refer patients to psychiatrists, who can evaluate the need for medication, the benefits of which are well documented. Drug and alcohol abuse among depressed men is common. Serious addiction might require more targeted auxiliary treatments like rehab or Alcoholics Anonymous in addition to psychotherapy.

We know that Major Depressive Disorder has some clear genetic and biochemical roots in addition to psychological and experiential ones. Part of the stigma of mental illness in general, and depression in men more specifically, is that it is a sign of weakness or moral failing. This is absolutely not the case. If you were born with Type I Diabetes, your physician would recommend some pretty clear treatment protocols. Although the treatment for mental illness is not as clearly defined or understood, it is important for men to appreciate its similarity to other conditions whose origins are free of self-critical interpretations.

This memoir contains some hidden wisdom from an unlikely source. While Christopher was not able to make use of this wisdom at the time, its inclusion in the text is important. It is important for men struggling with depression to get help wherever they can. This process might not start in the traditional setting of a professional’s office, though it might end up there. It might start with a friend, a barista, a pet, or a trip to a museum or ballpark. People or experiences motivate us to live better, healthier lives. Christopher’s message: Keep your eyes out for them. They could save your life.

At the end of A River Runs Through It, Norman and Paul’s father, a Presbyterian minister, gives a moving sermon not long before his death. He says, “For it is true we can seldom help those closest to us. Either we don’t know what part of ourselves to give, or more often than not, the part we have to give is not wanted. And so it is those we live with and should know who elude us. But we can still love them. We can love completely, without complete understanding.”

If there is a man in your life who suffers from depression, love him completely. It may be the help he needs before the understanding comes. If you are that man, be kind to yourself. Take the compassionate and important first step of reaching out and letting others help you. You don’t have to do this alone. 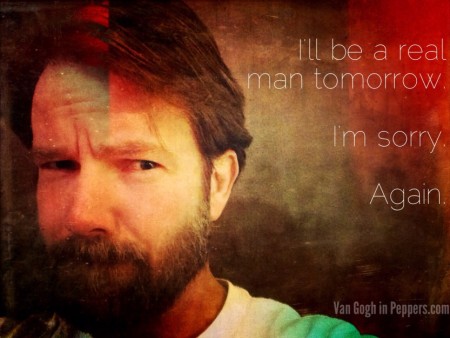 If you are struggling with depression or other mental health concern and would like to talk to someone please feel free to contact me. If I cannot help you I will put you in touch with someone who can. My office is located in Southfield, MI with convenient access to the neighboring areas of Farmington, Farmington Hills, Ferndale, Detroit, Royal Oak, West Bloomfield and more.